worked hard for it, so might as well wear the t-sh

still trying to wrap my head around what happened

what an amazing group of people… 😍 I don’t

We, #ultrateamNL, had a lot of fun and are very pr

Yessss-Koen nailed it!! 30hrs, 44min and some seco

Early August the big pre-race panic (or should I say ‘PANIC!!!!’) started to get to me… Although I am physically in great shape, the mind starts to play tricks on me. Self-doubt is a problem for me before every big race, but for a double, that feeling triples (or quadruples)… So, after a short search into the psyche of someone who thinks a double is a good idea (which should all-ready be reason enough to doubt ones sanity), the result is that I book a plane to Wales, and enter the Big Brutal Swim… Last year I did the 10km swim, and ran the ‘easy lap around the lake’ (I just keep calling it ‘easy’, let’s hope that helps with the pre-race-nerves…) and partially up Snowdon. I didn’t get a chance to ride the bike-course though, and that part of the unknown causes most of my current stress…

So, a long weekend of swimming, cycling and running it was! First thing to do, after dropping my bag at the Pete’s Eats’ dorm is go for a run. Oh… It’s good to be back! I recognise every inch of the run course, and it’s funny to realise that, with the extreme focus this year, I feel completely at home here… The easy first part of the run, the hard long climb after that, and then the reward; the beautiful track through the forest… I can’t imagine a better place to run today! Well, let’s enjoy it while I can, during the race itself it will probably be less nice, and slightly more painful… 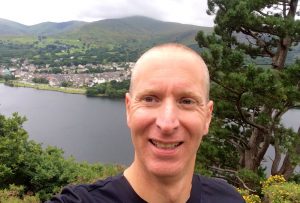 Saturday it’s time for the main objective of the weekend; riding the bike course! After a bit of searching I found a place where I could rent a road-bike, and got on my way nice and early… Riding the course was the best plan I had all year… Not only is it a great ride, enjoying the Welsh countryside and some great views, it’s also really good to know that the climb to Penn-Y-Pass (which looks quite scary on paper) is actually pretty nice! It’s long, but the views are great, and riding in a nice low gear it’s still doable to go easy on the climb. The little hill at Waunfawr however… That doesn’t even look like a speed bump on paper, but it was a terrible little climb… Good to know! So during the race I hope I’m prepared for that! 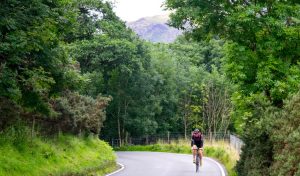 After the bike another quick run around the lake and a nice chat with Brutal race-director Claire, before I make it back to the dorm to get some rest… Well, rest… Mainly sharing stories and adventures with some great people, among them quite some triathletes; Ella (came out here for The Swim), Justin (crewing at The Swim) and Mark (doing a deca-triathlon in september… That’s 10 iron-distances in 10 days… That makes a double look easy!). 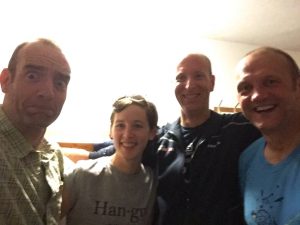 One of the great things of traveling is to meet some new people, and this group was a unique group… Couldn’t have asked for better roommates!

(and should you want to be inspired; check out mark’s blog)

Then it’s finally time to get to the swim! Last year the lake was freezing cold, so I’m mentally prepared for anything… Turned out today it was quit nice!

It was a relaxed atmosphere before the start, and when we finally got in the water it became just a long, long swim… There’s not much to say about 10km of swimming, you just go forward, and enjoy the great views that you get every time you breath… I’m swimming an easy stroke, and after every two laps at the exit (and feed-station with hot tea!) I shake Justin’s hand. Always fun to see a familiar face while racing!

My shoulder injury doesn’t seem to bother me anymore (I still feel it, but I wouldn’t call it ‘pain’ anymore), but during the last two laps I’m struggling to push out some power. Tired but happy I make it to the finish, after a really nice morning in the water! 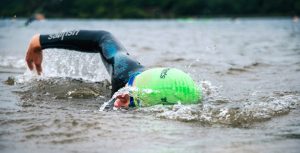 Sunday afternoon was time to go for a short hike, Monday morning a few pre-breakfast laps around the lake, and then it was time to go back home… Just a few days in Wales, but it felt like 2 weeks… It’s been a perfect mixture of training, racing, relaxing and good company…

The rest of the month it’s been about training, resting, and preparing the logistics for the big race. With two weeks to go I had a nice diner with my awesome support-crew, and that was the moment that I realised that it’s now really going to happen… We’re going to finish this adventure! (and yes, I do say ‘we’, it’s called an individual sport, but training, preparing and racing an extreme race is definitely a team-effort!)

Next blog will be the big one!