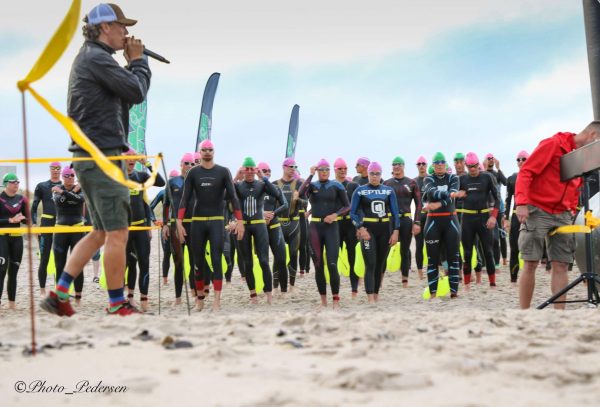 I’m on a beach, staring at the ocean, where every wave seems to be bigger than the last one. The sound of the waves hitting the shore is interrupted by a man with a microphone, saying a lot of stuff in Danish that I don’t understand, and then, at 6AM, the people around me start running into the water, and I do what everyone would normally do in a situation like this: I start running as well… This is the ‘Thor Beach Triathlon’, advertised as ‘Denmark toughest triathlon’, so this might just be a fun day! 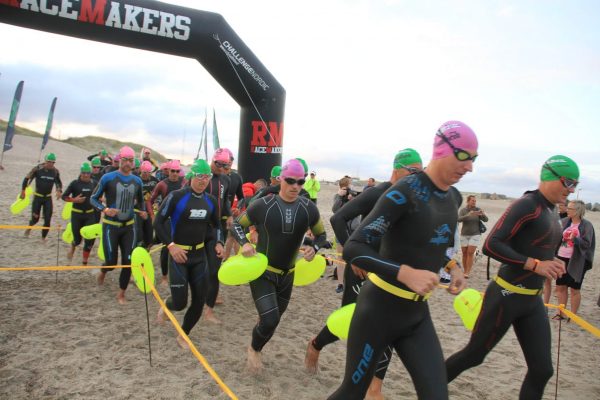 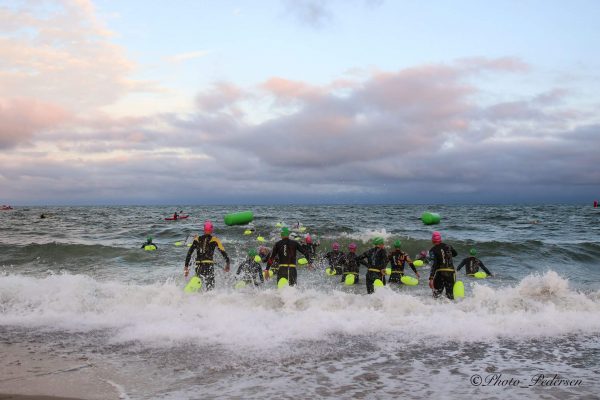 The plan seemed so simple: next week Coach and me swim the 21km vidosternsimmet in Sweden, so a nice half-iron distance triathlon somewhere on route would seem like a nice way to start the nordic vacation… After a bit of searching I found the ‘Thor’, and in full ‘Forrest-Gump-box-of-chocolates-never-know-what-you’re-going-to-get’ mode we signed up.

And sometimes you really don’t get what you expect… In a good way! Although it’s an extremely small-scale event, it’s perfectly organized: race directors Hans and Dennis are really friendly, and make sure that there’s never anything to worry about (from a perfect accommodation sleeping in the local school, to putting a lot of leftovers from the (also wonderful) pasta-party in the fridge to use anytime we want!).

The race-briefing was as usual just a walk-through of the manual, so all we needed to do was listen to the Danish version (with occasional translation into English when things were important, such as the railroad-crossing where there’s ‘hardly ever’ a train… (keep on reading to learn about a train on that crossing…)).

Back to the race…
I run into the water, meanwhile getting hit by the first big waves. We have to swim 2 ‘triangle’ loops, with a short exit, and the current and wind should be against us towards the first buoy. With the waves hitting I can’t see the buoy, so I just try to swim in the general direction other swimmers around me are, but with every wave we get moved to different places. I’m not panicking, but it’s close to a panic-attack, until I realize that I’m probably not the worst swimmer in the pack, and if other people can do this, so can I… Mental crisis avoided! From this point on I actually start to enjoy the rough water! 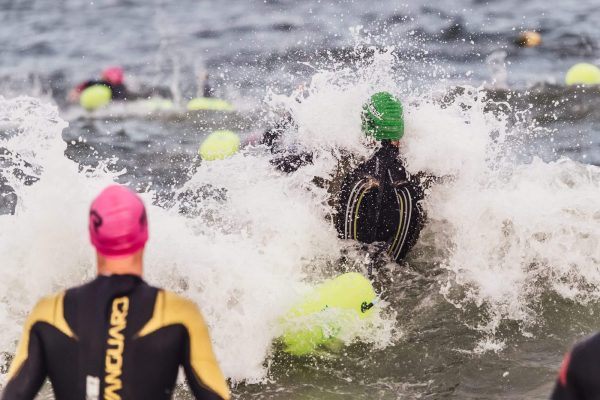 The second lap is a bit harder to navigate, but on the way back I get the rhythm, and feel as if I’m riding the waves like a surfer! Out of the water (with a faster swim then I expected in these conditions!), out of the wetsuit, and of towards the bike, which is a bit of a run away (first we have to get of the beach…). It was an amazing swim, beautiful sunrise, with even a rainbow in the distance (although no-one seemed to have seen that, so maybe I was hallucinating…)

On the bike there’s one full lap to do, and then a 30-ish km ‘out-and-back’ on the same course. The roads are nice, views are good, there’s even another competitor here or there (which is a surprise, given there’s just a few athletes out today). And even on a small-scale event like this: there’s volunteers at every turn to make sure you don’t get lost (which would be nearly impossible with perfect signing of the route…). 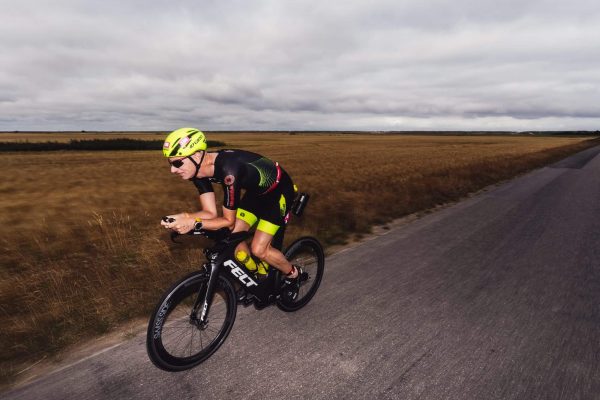 I’m riding relaxed, but with enough power output, got my nutrition under control, and at some point I actually decide that this is the most fun I’ve had on my bike in a long time! Well, until I get to the railroad-crossing where there’s hardly ever a train… The barriers close just when I arrive, so it gets me out of my bubble for a second… But it’s not a race, it’s just a nice day outdoors, so I eat another bar, wait patiently (it feels like 5 minutes, but it’s probably just 2), and I try to find my mojo again… 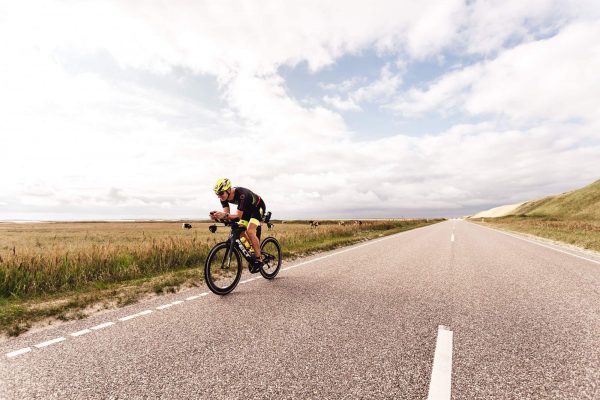 I finish the first lap smiling, and on the ‘out-and-back’ section I’m mainly surprised how fast the fastest athletes are riding…
Then it’s off the bike (not a second to soon: it turned out that I flatted my front tire just before transition…), and onto a little 24km beach run… 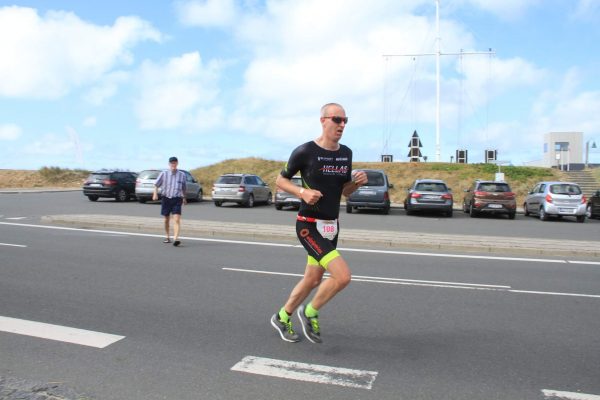 The run is fairly uneventful: it’s 12km down the beach, then turn around, and 12km back. The sand is soft, and every step takes a lot of energy. Every time I think I’ve found a bit of harder surface I sink in deeper, so this run is getting harder and harder… But from the turnaround point my diesel-ultra-engine kicks in, my mind starts to completely relax, and I find more parts that are easier to run (although most of those parts are covered in 5cm sea-water, but hey, who cares about something as trivial as wet feet?).

When I’m getting of the beach my legs have to get used to the hard surface of the final 500meter, and when I finish all I can say to the Thor-triathlon crew is ‘what an awesome race!’ 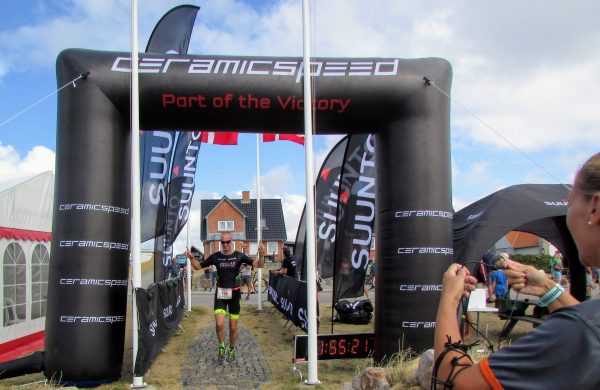 For everyone who’s looking for a new adventure: DO put this race on your bucket-list (either the full or the half distance)! This event deserves more competitors! Thank you to Hans, Dennis and their entire team for a great weekend!